40 American English Idioms That You Need To Learn

Learning English idioms is an important aspect of mastering English speaking. Native English speakers use a lot of idioms and slang during speech and without an understanding of these, it is hard to understand native speakers completely.

So if you already know about 500 words in English, it is time for you to start dive in to more advanced vocabulary areas such as Idioms and Slang.In this post, we are discussing some popular American English idioms.

If you are an International student who arrived in the US for the first time or someone who speaks with US clients for business, you will hear these idioms thrown around by native speakers.

Knowing these phrases and expressions will improve your English comprehension making it easier for you to understand what native English speakers are saying.

In the long run, with practice, you will also learn how to use these idioms when you speak in English.

How to Learn English Fast?

Bring down the house

– make an audience respond with applause, energy and enthusiasm

E.g. The contestant’s performance of the Celine Dion song brought down the house .

The squeaky wheel gets the grease

E.g. Harry could not stand Ryan’s complaining all day so he gave him the corner office space. I guess the the squeaky wheel gets the grease.

Jump on the bandwagon

-Join the movement or a group

Chip off the old block

-Meaning that a child is a lot like the parents, typically referring to the similarities between a son and father.

E.g. Look at Sam playing drums. He is definitely a chip off the old block

-An action that can be carried out quickly and easily

E.g. The company knew that translating their website to Spanish was a low hanging fruit.

–to understand that something is likely to be incorrect

-to do something too soon, without much thinking

The organizers jumped the gun and announce winners creating a lot of confusion.

-A person who criticizes openly and  severely

I got angry and spoke like a dutch uncle. I feel bad…

To come out flat footed

The whole team was partying till late so it was not surprising that they all came out flat footed to the game.

By hook or by crook

-by any means necessary

Try a Lesson with a Conversation Partner from America

– Figurative expression for understanding the experiences and daily tribulations of another individual.

“If I could spend a day in someone else’s shoes then I would choose Barack Obama, because then I want to know what his life is like.”

Peas in a pod

“The twin girls do everything together, they are two peas in a pod.”

Bound to a person, duty, or obligation.

“I’m not ready to get married or buy a house, I don’t want to be tied down.”

Pain in the ass

Expression for when a person, animal, or task is creating great difficulty.

“Have you made gyoza before? It looks like it would be a pain in the ass, but it’s actually really easy!”

A term utilized when an individual has more tasks than they have time and/or energy.

“I can’t do that assignment and help out with the volunteer group tomorrow night, I’m already spread too thin.”

The Best Way to Learn English 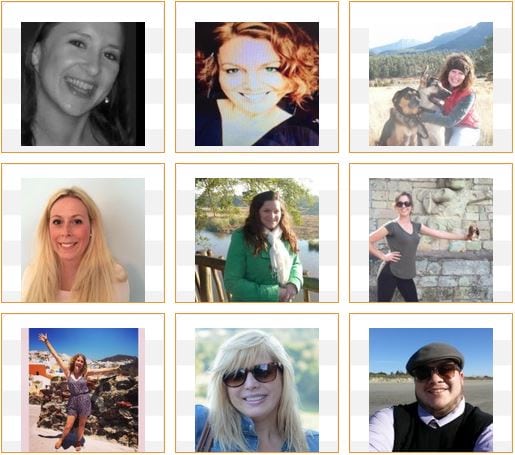 When someone is having lighthearted fun at another person’s expense.

“I know you’re the one that tapped me on my shoulder, stop pulling my leg.”

Meaning to perform one’s tasks at a certain base level, typically a standardized general level applicable to a group as a whole.

“Jeremy was fired at work because he couldn’t toe the line.”

Meaning to perform one’s tasks at a level of accomplishment that requires little or no outside assistance.

“We can’t take our son on the hiking expedition because it’s very rigorous and he will not be able to pull his own weight.”

An expression for a central concept or point that other related concepts can be summarized by. Also, a term used in business English for a company’s net profits.

“The bottom line is simple: You lost fair and square and you have to do better next time.”

A term utilized when an individual or group has become loud and disruptive in a public place.

”Jason didn’t tell his wife in the restaurant because he was afraid she would make a scene.”

Put in their place

The act of making an individual feel less-than and/or inferior; a term typically reserved for individuals that were acting with a sense of superiority but were then reprimanded.

“I’m so glad you put her in her place, maybe she will stop being rude to everyone now.”

Meaning a topic or subject is either one way or the other way with no in-between.

“Drugs are not a black and white issue.”

Earn a sufficient income, typically enough to support oneself and one’s family.

“My mother is a doctor, she is the one that brings home the bacon.”

Leaving a group of people without saying goodbye.

“Marcela was looking for you at the bar but then we realized you had done an Irish goodbye.)

Why Our Method is Logical and Fun?

Find clarity regarding an issue.

“I hope she sees the light and leaves her boyfriend after he did that to her.”

Figurative expression that means to allow oneself to see a situation realistically. “Open your eyes! She isn’t going to end that relationship to be with you.”

The shoe is on the other foot

A term for being in a situation that is the reversal of a prior situation or circumstances.

“Oliver used to boss me around but now that I am his manager, the shoe is on the other foot.”

Expression for when an issue is ambiguous in meaning or morality.

“I don’t know whether capital punishment should be legal or not, there is a lot of gray area.”

Figurative expression that declares that the world is highly connected interpersonally and through technology.

“I can’t believe you ran into your elementary school friend in Thailand! It’s a small world.”

Hair of the dog

To wake up and drink again after a night of drinking.

“If you have a hangover, the best cure is the hair of the dog.”

An individual that is lazy and prone to sitting on a sofa/couch.

“Mary is a couch potato, she eats a lot and watches a lot of television.”

An individual that is an outcast or fundamentally different from the others in his/her family or social group.

“Jessica doesn’t get along with her siblings, she’s the black sheep in the family.”

An expression for feelings of sadness, despondence, or depression.

“I’m going to skip the event, I am feeling blue today.”

A sullen appearance or demeanor.

“Why the long face?”

A period of time marked by heightened emotion, energy, or reactivity. Can also refer to prolonged inebriation or drug use.

“You should avoid talking to your dad this evening, he is on a tear.”

No comments to show.
Ad Unit